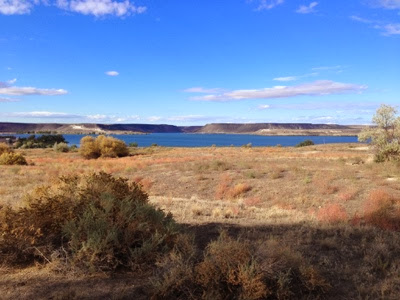 Out of the mountains and down to Idaho Valley Quail!  It was still in the 70's for the last few days here. The mornings were very pleasant, but the afternoons were hot and dry. We hunted in thick cover on the shores of the Snake River and Stryke Reservoir. The quail hunkered down in thickets and brush piles. When a dog pointed one end, they would boil out the other and head for even thicker stuff. In one area, they would flush in to trees. It was like shooting grouse in thick cover in MN or WI. 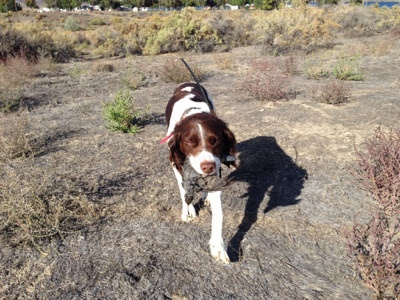 We managed to be successful a time or two and the dogs worked as hard as I've ever seen. Shown is Bandit, Glen Bahde's dog and one of my Ace dog's pups, on a retrieve. 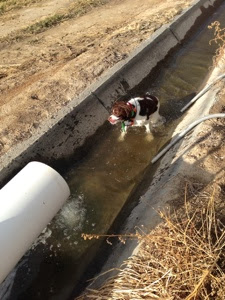 Out of the brush, we would find irrigation canals for cooling off.
Lunch was a community affair. At least the dogs thought it was!  There are very few fine restaurants with the ambience and cuisine of one's tailgate, a bird dog, and ham sandwich! 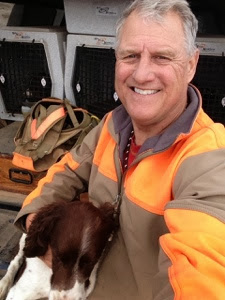 I had the pleasure of meeting Scott Linden while he was doing a seminar at the Cabelas in Boise. I reviewed his book in an earlier post, and it was great to be able to talk to him in person. He's a great guy and I highly recommend his book about what he learned from his dogs. It's full of insight and packed with tips and ideas for the new guy or old hand. (Christmas gift?). 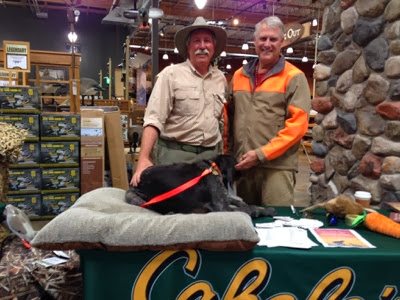 I have a few more places to hit, here in Idaho, and then I'll turn the Beast o' Birdin' loose and head back to Georgia. I have a litter of pups on the ground and my long-suffering better half probably has them sleeping in my spot in the bed. Talk about socialization! I'm excited to be able to pick my next puppy, but it's somewhat of a chore. I know they will be incredible bird dogs and I want to get the right one!  It's between a couple liver females right now. BJ says one of them is looking at her and comes to her. At 3.5 weeks, it may be a little early to choose. 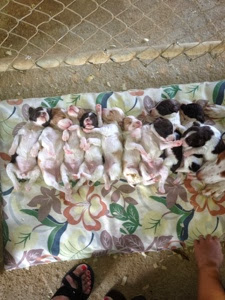 Posted by A Bird Hunter's Thoughts at 9:15 AM