Lost Dog! (What a sickening feeling.)

Sometimes, no matter what you do, dogs are going to do dog things (thanks to Kerri Gebler for that phrase).  This knucklehead, FlyBoy Ace's Bullseye (Shack), decided to go on a walkabout one afternoon last week.  When time is short and the dogs need some exercise, I'll let them all out, and I'll take off on the Kawasaki Mule.  As a group, they'll follow me and pass me as we circumnavigate the pasture- about a 1 mile run.  They get to stretch their legs and get a little aerobic exercise, and I get to watch them and do a little appraisal.  This time, when I pulled in to the barn, Ruby and Cap were already there, in the big water trough cooling off, and Pearl and Blue followed them into the trough. Shack was still out there, but I wasn't concerned. Sometimes, the males are a little bolder and will range a little farther afield, but they will show up within a few minutes hot and thirsty.

One minute stretched to five then twenty. I drove the pasture, calling and whistling with my hunting whistle. I checked for tracks down by the creek and found one of his as he hit the bridge crossing to the South side (away from the house).  I checked the sun, and figured I had about 2-3 hours of daylight left, and then checked the overnight lows (40 deg.).  I grabbed my boots, whistle, and GPS and headed for the large tract of land behind the house, hoping he was still on my part of it.  Just as the sun was setting, I called my wife to pick me up as I emerged from the other side of the tract  onto a dirt road. By that point,  the temperature was dropping rapidly and the wind was picking up, . From experience, I know a healthy dog can survive much lower temperatures and much higher winds, as long as they can find a place out of the wind.  Shack was no rookie bird dog, at 5 years old, he'd  hunted all over the U.S..  And, while he'd never been "turned around" this long before, I was confident he could find some cover and hunker down for the night.  I would resume the search in the morning.  In the back of my head, I figured he'd end up straggling into the barn in the middle of the night, worn out and hungry.

As an afterthought, I posted on our local Lost/Found county Facebook page, that he was missing, the area I last saw him, date, time and a picture.  Also, the info that my name and numbers were on his collar, he was micro chipped, and he needed medication. Then, I went to bed. Just as I was drifting off, my wife nudged me and said, "You should check FB one last time.  You never know who may have seen him."  I opened the page, and there must have been 20 comments tracking the bonehead as people saw him running along the roads around the county! One guy said, "I knew he wasn't a stray.  He looked too fit and sure was pretty.  I figured he was one of my neighbor's dogs."  Another lady wrote, "I wish I'd seen this 5 minutes ago!  I just saw him in the parking lot of New Hope Church!"  That post was about 10 minutes old.  New Hope Church was about 5 miles from me on roads that went every different direction, except direct.  I jumped out of bed grabbed some pants, shoes, shirt and jacket, cranked up the Beast and tore down the driveway.  I made it to New Hope Church faster than I care to put in print, pulled into the parking lot, got out and started calling....nothing.  I slowly turned, using my headlights as I scanned the graveyard and surrounding pasture.  My phone rang, and it was a guy who said he saw Shack on the road about a half mile from the church.  "On my way", I said..."Thanks, neighbor!" As I pulled to the side of the road, he came out around one of the old houses and looked at the truck.  "C'mere, boy!  It's good to see you!"  That knotheaded Brit came in the driver's side and just curled up in my lap.  All 50 pounds of him was on me- and he would not move.  He was absolutely scared to death, and mighty glad to be with me.  I guess I was a little glad to see him, too.   Dogs doing dog things!
Posted by A Bird Hunter's Thoughts at 3:56 PM

It once was lost, but now is found! Happy Day!

In 1959, in Anchorage, Alaska, (before digital anything, ballpoint pens, computers, seat belts, radial tires, color TV) my mom and dad entered a jitterbug contest (It's a dance.).  First Place was this pistol.  The next year, on my 10th birthday, my parents gave me the pistol, and the holster my dad hand-stitched for it.  We used it to finish moose, goat, caribou, squirrels, rabbits, monsters, lions, tigers, and bears. A few years ago, I took it to the Georgia Region NSTRA Ironman Trial in Sparta, GA.  It was the last I saw of it.  As much as I loved that pistol, I had to remind myself, "It was only a tool.  A tool attached to my past and my parents, but only a tool."

Yesterday, in a burst of energy, I was registering for the Veteran's Administration. They really didn't require any documentation (they said they'd verify everything), but I wanted to send along my DD-214 and whatever else I could find.  That meant rooting through file drawers and closets.  Lo and behold!  In one of the file drawers, I found this little beauty!  Cleaned, oiled and ready to go!  I think it would be impossible to be more surprised!  And delighted! My little Ruger Bearcat .22 was home!  Of course, it was home all the time, and my "age-appropriate" memory degeneration meant I lost it, then found it again.

I looked up the Ruger website to try and ascertain the age of the pistol.  The Serial Number is N033. I think this is the 33rd pistol manufactured from 1958-1976.  I'm not positive about that, but it sure looks that way!  I sent off for a verification from Ruger.  That would be a nice way to remember my jitterbugging parents from "back in the day" 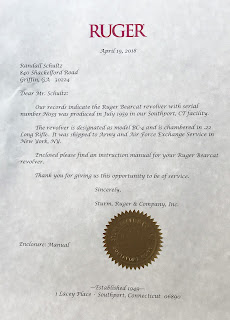 Last Fall, as I was preparing to hunt the Nebraska Sandhills for the first time, I went through my usual routine of calling the DNR (or equivalent for that state) and asking for any assistance they might feel like providing. As usual, it took three phone calls to get to the right guy, but he was perfect. Bill is the resident expert in Prairie Chickens in Nebraska.  We talked for a while on the phone, and I made it a point to stop by in person when I got to the area.  As I was leaving to begin the chase, I asked about the mating rituals and leks.  Bill said, "Why don't you come back in April, and I can put you up close and personal with the birds?"  By the beginning of March, I was ready for a road trip.  I made the call to Bill.  "C'mon up." he said,  "It's almost a perfect time."  Two weeks later, I turned the Beast northwest and let her rip.

April weather is normally pretty settled, but snowstorm after snowstorm still plagued the Sandhills.  One day was sunny and cool- the next it was snow and 20 degrees.  We happened to hit the area the day after a violent front and snowstorm came through.  Not to be deterred, we drove out to the blind an hour before sunrise with the thermometer reading 0 degrees.  Later, we found out it set a record low temperature for the area!

A little before daylight, we saw dark shapes flying in from all points of the compass.  In one's and two's, they flew  to the area and started walking to the Lek.  The Lek is the name of the breeding area- a generic term.  For Prairie Chickens, it is called a Booming Ground because of the low tone emitted by the males.  It can be heard for up to 1.5 miles away, and it's a great way to locate leks.  (Sharptail Grouse, on the other hand, have Dancing Grounds.  Often in the same general area.)


For the next two hours, the males strutted, fought, talked trash, boomed, rested, attacked, and retreated.  All of them tried for the high ground.  Bad Boy (above) kept them all in check.  Once, they all flushed away, but in less than 5 minutes, they all returned.  Like Bill said, "These birds are here for a reason.  Breeding.  It will take a lot to interrupt their courtship rituals."  We counted nearly 20 males on this lek.  Bill told us, in this area, there were 5 or 6 leks.  The males stay pretty close to their leks throughout the year, even though they may fly 20 miles to grab some nice grain, they'll come back to the local area.

This lek is on a private 20,000 ac. ranch in the Sandhills.  Bill works with the local landowners to increase understanding of the Greater Prairie Chicken and, perhaps, slow or stop the reduction of their range. After almost 3 hours of the coldest shivering I've experienced in 67 years, the birds, as if on cue, flushed up and away.  This time for the rest of the day.  We came out of the blind, and I attempted to regain feeling in my feet and hands.  It took a while, but the recovery was complete.

All this display is for the females to pick a winner.  Then, all of them will breed to one male.  This display is critically important to the males for this reason.


I learned a tremendous amount about Greater Prairie Chickens in one day with this visit. When we left the blind, we drove to where I hunted them last Fall.  We got out of the truck and made a loop around a stock tank, and I saw some tracks.  "Gotcha, boys!  I"ll see you in November!"  But, between now and then, I have a puppy to train, grass to cut, and fish to catch.