Some Photos of Oklahoma Hunting by Christine Harrison 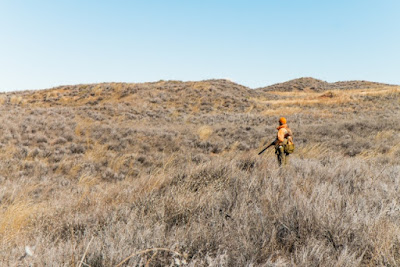 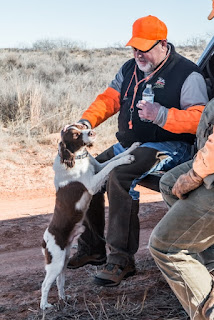 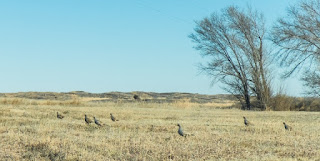 We had a great day chasing covey after covey through the sand dunes and Christine captured a lot of it on film.  She really knows her way around a camera, and she and Robert were delightful companions in the field.  https://ccsphotographyonline.smugmug.com/

Posted by A Bird Hunter's Thoughts at 1:12 PM


A few weeks after returning from New Mexico, I was ready to head somewhere with the dogs.  They were at the top of their game, totally fit and ready to load up.  Over dinner after a movie, I casually mentioned to the BandC that quail season was still open in parts of the west.  In moment of weakness, she allowed as how she'd be OK with my absence for a few days. 'Nuff said!  I was out the door at 0400 the next morning headed to Oklahoma!


Why Oklahoma?  I missed the opener, due to the heat and really not wanting to drive 12 hours from North Dakota (hunting pheasant) just to go shoulder to shoulder with every other birdhunter from the South.  It was hot that weekend, so I turned West and went back to Montana for some Sharptails and Huns.  Now, here I am in the last few weeks of a banner year, hunting public land and easily finding large coveys.  Yes, they've been flushed numerous times and they are a bit "wild",  but my boys really did well with them and put me in shooting range a lot over the next 5 days.


I hunted public land.   Oklahoma has several large 10,000+ acre Wildlife Management Areas around the state that are managed for birds (quail, dove, etc.).  Of course, they get a lot of pressure throughout the year, especially in a year like this one, with a bumper crop of quail. One of my past favorites was Cooper WMA, near Woodward, OK.  Rolling sand hills, with mesquite and plenty of ragweed and sunflowers and water tanks, give Cooper a perfect habitat for Bobwhites.  Fort Supply WMA (across the street from Cooper) is another great spot.  There are many listed in the "Where to Hunt" section of the state website.  Each has a listing for  a resident biologist or manager and they are most helpful with your questions.  ("Where are the most coveys?" questions might not get answered. Really? Do some scouting.)  For example, at Packsaddle WMA, the resident manager advised me to "get a mile away from a road or parking area since 99% of hunters make a mile loop".  I thought about it, and he's right.  I do the same thing.  Black Kettle WMA is located in the Black Kettle Grasslands and it's spread around in separate tracts.  But, maps are available and the tracts are large and easy to find, well marked.  Caution!!!!  Some (not all) of the WMA's close for hunting at 4:30 PM. You need to check (closely) the regs for each area to see which ones.  The rumor I heard was that a prominent bird hunter from the Idaho area suggested this rule to protect the Bobs when they start coveying up for the night.  Whether that's true (I think it is), or not, don't be on the receiving end of a $200 fine.


I started out at Black Kettle WMA and had some initial success.  We hit a few spots and found a few coveys.  Lots of hunters were in the area. There were four groups with dog trailers at my motel, some had been there more than a week.  I had some trouble locating areas that were not "claimed", by the time I found a nice one.  (Interestingly, I saw plates from Kansas, South Carolina, and Oklahoma.) So, I packed up and moved to another WMA further North.  Few hunters, sandy, hilly terrain and a great population of Bobwhites met me the next day.  The first afternoon, in 2 hours, I found 4 coveys and never got farther than 400 yards from the truck! The dogs, fresh from working the running SOB's in New Mexico, were loving life on these tight-holding Bobs.  I'm still smiling!

The good thing about very late season hunting is the corporate information available on bird numbers, habitat and locations.  Of course, the bad thing is the fact that the birds have been shot into for the last 3-4 months.  This year, that didn't touch the numbers.  The numbers of hunters, of course, was way down, as well. And, to me, that is a great thing.  To have thousands of acres to roam and hear nothing but quail whistling and the wind in the trees and grass, that is a special day- a day to drive a thousand miles to experience!