Get Your Dog in Shape! He goes 10X farther than you!

To my mind, the very best method to get old Buck in shape for the upcoming bird season is "roading"- a method by which a dog will run and pull on a heavy object at the same time.  The benefits to the muscles and cardiovascular system are tremendous, in a short time. Brian Lynn, at Outdoor Life Magazine, just published an excellent article about dog conditioning, in general, and roading, in particular. (Click HERE to see the article.)

I highly encourage you to use some form of roading in your dog's conditioning.  Off a bicycle, perhaps.  I don't have the numbers, but I would be confident saying roading is more than double the benefit of letting your dog run free. My dogs really enjoy it, which is another mystery of life.
Posted by A Bird Hunter's Thoughts at 11:21 AM

Posted by A Bird Hunter's Thoughts at 2:36 PM

So far, I've owned five of these little goodies; one given away.  A few years ago, I reviewed the unit. Since then, I've traveled thousands of miles and hunted/covered thousands of acres of land all over the USA- most out of cell coverage.  A lot of that hunting was solo, over ground I'd covered before, but it gives me a sense of security knowing I can get help if life takes an unexpected bad turn. (Click here to read the original review.)

I mentioned above that I've owned Five of the devices.  The first one was the earliest model.  I used that one until Model 2 came out, lighter and faster response.  I used that one until it fell out of the truck in a rest area in central Montana, while I was returning from my first trip to Idaho and on my way to MN for some Ruffed Grouse hunting.  Discovered missing the next day, I realized I would spend more than the cost of the unit, in diesel, to go back and retrieve it, so I bought another one at the first sporting goods store I encountered.  I bought number Four when I realized number Three was missing and the season was fast approaching.  I found number Three and gave it to another solo hunter I met in MN.  Number Four was lost in AZ in January of 2013 and Number Five just arrived via UPS.  So, if you are like me, you are wondering if perhaps they have a reverse sensor so that knuckleheads like me can find their SPOT when it is lost.  The irony was not lost on me when I called the good people at SPOT and told them the unit was lost- not me. Maybe they are developing something like Apple has in "Find my iPhone/iPad".  That would be a very nice feature!

At any rate, while four of the five units is on me, the last lost unit was directly on SPOT.  It fell out of the carrying case that came with it and which I used, attached via carabiner to my vest. I noticed the new case was changed to prevent that from happening again, however the quality of the current case is suffering.  The snap that secures the unit separated the second time I used it and I substituted a zip tie.  While a zip tie is a good fix, I wonder how many more units will be lost when the snap fails during use and the unit falls away?

So, I do recommend the SPOT for those that want peace of mind while hunting or in areas there is no cell coverage or as a backup to cell service.  Personally, I would NEVER use my cell phone as an emergency device.  I've seen too many of them fail.

I still rate this as a MUST HAVE- BUY IT!

(Just don't lose it.  Buy the extra loss insurance.  Modify the carrying case and back up the snap.)

She normally comes in around March. I know exactly, because that is the around the time we have the Georgia Championships for NSTRA. A female in heat cannot participate in a NSTRA trial, so for the last two years she's be unable to go out and have a good time at that event. This year, however, she did not start her cycle. The one year when I was set to breed her to Ace, my main dog who is 8 now, she does not even come in to season!  I was disappointed, to say the least, but I realized I had three great bird dogs and a season of hunting ahead- where's the downside to that?  We are not sure why she didn't come in, perhaps the coccidia infection from NM or AZ in January?  Vet says that could slow her up as her body fought the infection then fattened up afterwards.
Either way, it's been 8 days since she started bleeding and it's time to introduce Ace to his girlfriend. Puppies in 60 days, my friends! 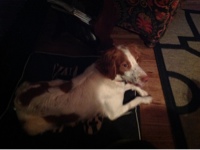 Posted by A Bird Hunter's Thoughts at 6:25 AM