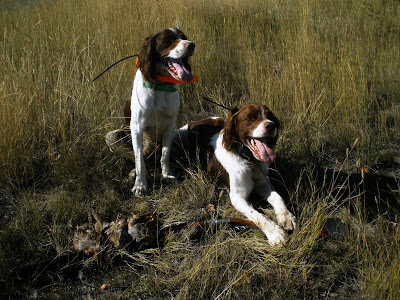 It was a warm one last September in Montana! Ace was giving Bandit a few lessons in the fine art of Hungarian Partridge hunting. We stumbled in to a real hot spot and had some great hunting for several days- not only Huns, but Sharpies, too. At one point in this cast, both dogs were pointed on a large covey that had dropped off the alfalfa field and was hunkered down in tall grass on a steep slope down in to a hardwood bottom.  The dogs were still in the field pointing the edge.  When I stepped in front, about 5 feet from the edge, 30+ birds got up and headed to Canada.  I dropped two and they both fell well down hill in the brush and grass.  Bandit broke and went over the edge like a Olympic downhill racer.  Ace went left along the edge, nose up and hunting.  Bandit stayed in sight and I worked to get him on one of the dead birds.  I used voice and hand signals and put him in the area- then he found it and started his climb up the hill.  It was hot for him, and when he reached me, we had a little love-in with water and shade.  Still no sign of Ace.  After a bit, I started thinking he got down in the brush and went on point.  I grabbed the Garmin and noticed him well off to the left and about 200 yards away, but making his way back.  I gave him a short toot on the whistle and looked for him down the hill.  A few minutes later, he came trudging up the hill- with a Hun in his mouth.  Evidently, I didn't kill the first bird as dead as I thought!  Ace was on him the whole time.   He said he'd let the young buck jump off the cliff and fetch the bird in front, grabbing show points! In the meantime, he'd ease on down there and trail, find, retrieve the wounded bird.  Good job, buddy!
This reminds me of the bumper sticker I saw- "Preserve Game-Hunt with a Dog".  Also, kind of reminds me of the "Young Bull, Old Bull" story....

Posted by A Bird Hunter's Thoughts at 2:39 PM

Some Good Blues Hunting in Texas

I came across this picture of me, self-taken, after a day hunting blues in the TX panhandle. You can't see it but there is a limit of the little cotton-tops on the ground by my knee. I was driving out after a frustrating day, thinking about moving on up to SD, when I saw a bird flush to my left. I stopped, grabbed my gun, my dog Ace,  a pocket of shells, and stepped off the graded sand road of the ranch. Right then the world exploded at my feet when 30 blues got up all around me.  I mean, I stepped into the middle of them, and a bunch more ran off into the brush. Ace locked up to the flush and I watched as they scattered out along a stretch of flat, brushy, sandy, grazed-over pasture. The sun was at my back, the breeze was in my face, it was 30 deg. and there was a big grin on my face as we set out to some great shooting. Ace locked up time after time pointing two or three of the little buzz bombs before they erupted out of the cactus, shin-oak, or grass pile. We took our time, easing along and hitting all the cover, ditches and vegetation. What seemed like 5 minutes later (actually an hour or so), I grabbed for more shells and came up empty- with a dog on point, the sun on the horizon and the temperature dropping fast. I had one shell left in the A.H.Fox 20 ga. double and was one bird shy of the limit here in TX. (Limits never held much fascination for me.  I rarely get close enough to worry about them on quail, but today it would be nice to round it out.) Ace was locked down at the base of a cactus as I eased on up alongside him. I glanced at his face and it was set in that stony look bird dogs get when they are dead center of the scent cone mesmerized by the smell. I kicked at the shrub and 5 gray blurs came out of that cactus heading in all points of the compass! As a lefty, I locked down on the one heading from my left to right. I checked his location down the barrels and pulled the trigger.......

It was a day to remember.

Posted by A Bird Hunter's Thoughts at 3:32 PM

Here he is, Boss. 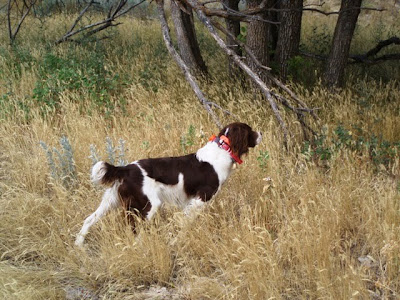 Posted by A Bird Hunter's Thoughts at 7:38 AM

I saw the covey leave, but he didn't chase them, so I took a few minutes and shot a some pictures!  Nine months old.  I think he'll be a good one.
Posted by A Bird Hunter's Thoughts at 1:17 PM

I figured "How in the world can anybody miss a bird with a shotgun? ". I mean you are shooting a pattern 30" across at 25 yards and a bird in that zone should be killed- what's the sport in that? Plenty, as it turns out. I don't even remember what my first gun was- a big 12 ga. auto loader, I think. I used to miss birds plenty, too. Finally, a buddy up in TN told me anything bigger than a 20 ga. on quail was just murder, so I got one of those-a Browning Citori Upland Special, to be exact. This thing had a short (26") barrel and a straight stock. It sure was pretty, but, once again, I couldn't hit the ground with it. Finally, about 15 years ago, I chanced upon a double in a gun shop. I hefted the thing and instantly fell in love. Never even having shot it, I offered the guy $200. He laughed and said $2500- it was on consignment and he thinks the old lady really wanted to get rid of it, otherwise it would be a lot more than that. Since I had no adult supervision at the time, I went to the bank and got a loan for the gun and I walked away with my very own A.H. Fox 20 ga.- built in 1912. Some folks would put it on the wall and stare at it, but I don't have any guns like that. Mine are bird guns or they are sold. This sweet little gun was like an extension of my arm- point and shoot and go get the bird. I still shoot that light little gun every season. I kill quail, grouse, woodcock, Huns and sometimes pheasant with it. And I really like the double gun- that big sight plane and the rounded pistol grip on the stock is perfect for me.
I've moved to the 16 ga. for pheasant and Sharptail grouse. For some reason the slightly larger gun seems to drop them more dead, more often. In a moment of weakness, I obtained another A.H.Fox- this one a 16 ga. It's newer (1930's I think) and much more ornate with the carving, but it, too, is perfectly balanced. I sent the barrels Briley in TX to have checked and they called me back the day they got them and said the measurements were EXACT on both barrels! I mean it was a big deal for him to say that- he'd only seen it once or twice in his career. I told him it was a Fox and the details and he said it was a fine barrel set and I'd better take care of it or he'd personally hunt me down!!
So, I guess I prefer the double gun. I like the way it shoots, and the classic feel of the gun. Some folks need that third shot and I suppose I'd have more birds in the bag with more shots, but, hey, I'm OK with these old doubles.

I still like my doubles.  In fact, that old Model 100 SKB has shot about every species of bird I've hunted.  Once in a long while, I will break out the Ruger Red Label O/U I won at the 2009 NSTRA Grand Nationals, just because I like the heft of the thing.  Especially when I'm shooting 3" 4's on pheasant.  But, overall, a nice double gun has the feel that I like....
Posted by A Bird Hunter's Thoughts at 2:51 PM

I just vaccinated my pup, CAP.  He was too young last year to administer the vaccine, made by Red Rock Biologic.  He, along with the rest of the pack, will get his booster in 30 days.  That will put them all with peak protection for the Montana trip in September.  Last year, after 20+ years of never seeing a snake, we had several up close and personal encounters with Prairie Rattlers (one of the snakes protected against by this vaccine).  I was darn glad I'd had the foresight to vaccinate.  They say there are too many variables to speak with precision, but the vaccine should make the reaction much less and the recovery shorter.  Good enough for me.

Also, I bought some Turtleskin Total Protection Snake Chaps.  They are so comfortable, I think they will replace the pair of Double Tin Filson Chaps I bought (and have worn since) 1991.  Aside from re-waxing every 4 years and patching with duct tape and denim iron-on patches, they are still looking pretty good.  And they bend in all the right places, that's for sure.  I'm going to keep them around, no doubt.  These Turtleskin Snake Chaps are very lightweight and comfortable and absolutely snake, water and wind proof.  I'm looking forward to trying them out behind a dog in a few months.  (www.uplanders.com).

I also carry an emergency snake kit with steroids and benedyl and syringes. During the drive to the vet, I would inject the dog to lessen the effects.  I put the kit in a PVC tube and orange painted the ends, so I could find it in a hurry.  I have the instructions written in  Marker in the outside of the tube.  No mistakes.
Posted by A Bird Hunter's Thoughts at 12:34 PM