I figured "How in the world can anybody miss a bird with a shotgun? ". I mean you are shooting a pattern 30" across at 25 yards and a bird in that zone should be killed- what's the sport in that? Plenty, as it turns out. I don't even remember what my first gun was- a big 12 ga. auto loader, I think. I used to miss birds plenty, too. Finally, a buddy up in TN told me anything bigger than a 20 ga. on quail was just murder, so I got one of those-a Browning Citori Upland Special, to be exact. This thing had a short (26") barrel and a straight stock. It sure was pretty, but, once again, I couldn't hit the ground with it. Finally, about 15 years ago, I chanced upon a double in a gun shop. I hefted the thing and instantly fell in love. Never even having shot it, I offered the guy $200. He laughed and said $2500- it was on consignment and he thinks the old lady really wanted to get rid of it, otherwise it would be a lot more than that. Since I had no adult supervision at the time, I went to the bank and got a loan for the gun and I walked away with my very own A.H. Fox 20 ga.- built in 1912. Some folks would put it on the wall and stare at it, but I don't have any guns like that. Mine are bird guns or they are sold. This sweet little gun was like an extension of my arm- point and shoot and go get the bird. I still shoot that light little gun every season. I kill quail, grouse, woodcock, Huns and sometimes pheasant with it. And I really like the double gun- that big sight plane and the rounded pistol grip on the stock is perfect for me.

I've moved to the 16 ga. for pheasant and Sharptail grouse. For some reason the slightly larger gun seems to drop them more dead, more often. In a moment of weakness, I obtained another A.H.Fox- this one a 16 ga. It's newer (1930's I think) and much more ornate with the carving, but it, too, is perfectly balanced. I sent the barrels Briley in TX to have checked and they called me back the day they got them and said the measurements were EXACT on both barrels! I mean it was a big deal for him to say that- he'd only seen it once or twice in his career. I told him it was a Fox and the details and he said it was a fine barrel set and I'd better take care of it or he'd personally hunt me down!!

So, I guess I prefer the double gun. I like the way it shoots, and the classic feel of the gun. Some folks need that third shot and I suppose I'd have more birds in the bag with more shots, but, hey, I'm OK with these old doubles.
Posted by A Bird Hunter's Thoughts at 8:28 PM 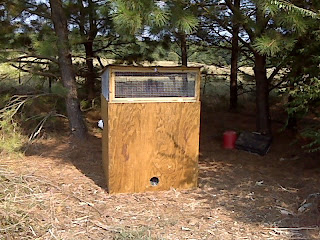 I was feeding and taking care of my dogs in the dark outside the Sands Motel in Hobbs, NM last February. (Getting them good food and making sure they were warm, watered and comfortable always takes place before we get comfortable ourselves- "The horse, the saddle, the man." was the priority of the US Cavalry at the end of the day and it makes a lot of sense to me.) Anyway, I was taking care of my dogs and another hunter walked up, introduced himself and we started talking hunting. He was from NC, a retired Game Biologist, Vietnam Vet and bird hunting nut like me. Robert and I decided we might as well hunt a day together. We had a great day chasing birds, telling lies and comparing dogs out in the NM desert. Robert was a confirmed setter man, but really liked my Brittany, Ace- his drive, nose and biddability. I allowed as how Ace would be siring pups in a bit and he allowed as to how he'd really like one. A deal was struck and I gave him the Pick of the litter. Little Lily came out of that- she was the only female and she's beautiful. She got the best of both parents- drive, smarts, nose and hunt. About a month later, Robert showed up and dropped off a Johnny House for me to keep birds in for training- made by him. I'm having a ball designing automatic watering and feeding for the birds to minimize human contact- it works pretty good. I let 4-5 birds out every day and by the next morning, they are back with their buddies slamming down breakfast and telling tall tales! For you non-bird dog folks, Johnny Houses are great for training, because you can release quail and let the dogs point them, etc., and they will fly back home to be used again and again. It's a real money saver- besides, its just fun to know they will come home every night for dinner!
Posted by A Bird Hunter's Thoughts at 5:43 AM 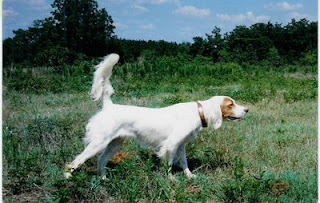 Here's my main man and a few of his pups. Like peas in a pod!!
Posted by A Bird Hunter's Thoughts at 7:15 PM

I've used EMT Gel practically every trip for the last 5 years- even on myself! That stuff is awesome. Rumor has it that it has super glue in it- don't think that is right, but it is good stuff. I have one scar on my right knee from a barbed wire fence in Texas. I got hung up crossing to get to Bo on point on a covey of quail. I could see him, so I really didn't think anything of it when I felt a little cut and torn jeans. I got down there and we chased birds for an hour or so. When I noticed my socks were wet and the ground was dry, I took some time to take a look. I was flayed open for about 4" and over a 1/4" deep. Wasn't much I could do at that point- besides, we had coveys everywhere and the dogs were on point again. I grabbed some EMT gel, slapped some on the cut, put my pants back on and shot some birds. What a great day! And I have the scar to prove it. (I considered a tetanus shot- doesn't the 10 I got as a kid count?) I use it on the dogs all the time for holes and cuts. Super glue is in my kit too- developed to close wounds, it works like a champ. Although I haven't used that one on myself yet.......
Posted by A Bird Hunter's Thoughts at 3:10 PM

Just visited Billy at the feed store for ProPlan feed, Nutrical, and some medical supplies. I'll hit the vet later for antibiotics and will pick up some gauze and stuff. This year all the dogs have the Rattlesnake Vaccine and I have my usual snake bite kit of injectable benadryl and steroids. I also know where the nearest vet is everywhere I hunt. Speaking of medicals- the stapler I got from my vet last year is great. I've used it three times already for open cuts. Betadine, scissors, athletic tape, and duct tape with Triple antibiotic ointment round out my bag. Actually I have lots of other stuff in there, but those are all important. If one the dogs gets injured they get the best and it's not uncommon. They have a tough life and it's a hard job to do- good thing they love it!
Posted by A Bird Hunter's Thoughts at 2:49 PM

I'm testing this mobile blog from my blackberry. Still not sure about all this connectivity! Well, I do have a week and a half of work to do before I leave on my first hunt- so I'd better get to it.

Who in the world would give a hoot about what an old bird hunter is thinking? Ha- we'll see! 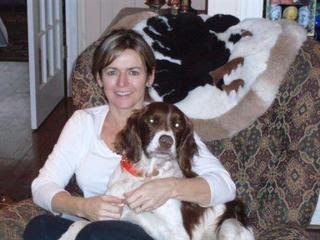 This is my wife and my top bird dog, Ace. You gotta like a woman that loves your dogs too !! She's a keeper.
Posted by A Bird Hunter's Thoughts at 12:26 PM 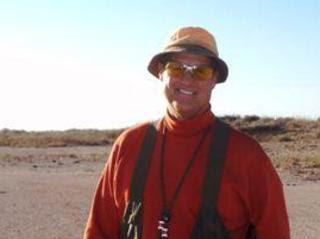 Email ThisBlogThis!Share to TwitterShare to FacebookShare to Pinterest
Posted by A Bird Hunter's Thoughts at 12:19 PM

My first hunt is set for 5 Sept to MT! I've been waiting all year for this, well, at least since February when I got back form my last hunt. I don't have any use for summer with all the heat, grass cutting, etc. it's too hot to train dogs and the pasture is too high. Can't wait! Today the UPS man brought another tritronics receiver with a beeper collar too. Now I can run 2 dogs at once with beepers. In MT it's not too important to have collars on the dogs, but in WI the second week, you can lose a dog in a heartbeat. The cover is so thick- so I like to make sure all the dogs have collars.

Well, I'll have to think about this blogging thing.......