I was extolling the virtues of the WingWorks vest to a plantation manager and his head guide the other day explaining the well-considered features.  After the day spent driving the vast quail-managed property discussing bird dogs, quail habitat and managing for hunters, guiding and other war stories, I said my good byes and headed home in my friend Glen's truck. Later, I discovered a missing vest, iPad, camera and various other items that failed to make the transfer to my truck for the journey home. The next day we both drove 45 minutes to meet in the middle for a hand off and things were back to normal...

As I grabbed my vest from his truck, I glanced in the bird bag at the sticks, feathers, wool hats, spent shells, empty plastic bottle and various other stuff. I started thinking, driving along, looking at feathers on the floor board.  I got home, pulled the vest to hang in the barn room, reached in to grab some more feathers and clean out the back of the vest.

I saw Sharptail Grouse feathers from my September trip to Montana. Memories of Ruby (B/F/1.5yrs) loping along the sagebrush hills and spinning to point a plum thicket absolutely full of Sharptails.  Ace (B/M/7yrs) working the edge of a green alfalfa field, dropping in to the creek for a quick dip, climbing up the steep bank and slamming to point on a forty five degree slope on a small covey of Sharps.  And Cap (B/M/1.5yrs) disappearing around a clay mound, one hot day, forcing me to walk around the hill looking for him, only to find him standing tall on a covey of seven or eight Sharps.

A few small Hungarian Partridge feathers were mixed in the brew, I think from the day Ace and I managed to corner six coveys just before sunset with the temperature dropping and a long walk back to the truck.

One, long rooster tail feather fell out on the floor.  No doubt this feather was from the bad boy rooster Cap and I worked along the  gravel road outside Regent, ND.  Cap worked him, pointed, worked him, pointed- for almost 200 yards.  He was careful not to push too hard, and for a 1 1/2 year old pup, it was a pleasure to watch him work the bird like a much older, seasoned dog.  Finally, the rooster made a fatal mistake and veered to the road and the edge of the CRP grass.  He stopped and, following right on his scent, Cap locked up, high and tight.  For some reason, I just knew this was a rooster and a big one at that.  Sure enough, he got up, squawking and flapping, right over Cap's head, banked right  and headed for the hills.  A load of 5's caught him square and the puppy made a great retrieve to hand.  A little bird dog love fest ensued for a few minutes right there on the prairie.

Mixed with the feathers, a wool watch cap came out.  Nancy Whitehead, I have your hat.  Remember when we hunted along CJ Strike Reservoir in Idaho?  It was cold that morning, but warmed up nicely. You aren't but five foot nothing and hauling all that camera gear, I guess, will warm you up, too.  I don't remember the hat going in my bird bag, but I know it's yours.  I'll return it in person this October! 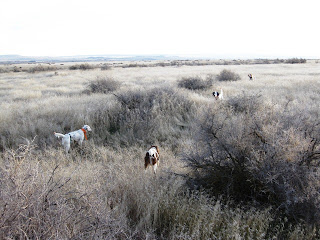 Valley Quail feathers from the sloughs and plum thickets in Idaho were in the mix.  Probably from the day we had 40+ points in an area maybe a half mile on a side.  Four dogs either backing or pointing a small shrub with fifteen quail hunkered down inside.  We took pictures and took our time and finally kicked the bush and shot the birds.  What great fun that day was...cold and wet and perfect.

My favorite feathers of the trip I hold to the last- my Chukar feathers from Idaho.  Cap on point, Aaron, my friend and his dog, Remy working up alongside and the birds getting up over the volcanic rocks and heading down in to the steep canyon.  I knocked one down and Cap gave chase.  He made a retrieve that still brings a grin to my face and the little Brit put that Chukar in my hand.  He looked up and said, "Hey, Boss, there's more in here!  Let's get 'em!" 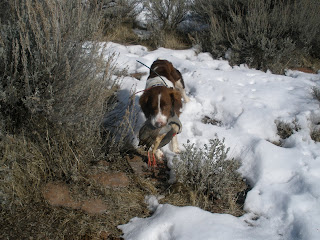 An old, plastic water bottle from Minnesota with a Ruffed Grouse feather still stuck to the side brought memories of Ace panting and staring and as immobile as a marble statue, alongside the trail as I came around the bend.  The light roar of wings as the male Grouse headed to cover just a split second too late.  Ace put the bird in my hand with a slight wink as we acknowledged each other's contribution to the evening meal.

Not a bad year for memories, I think, as I clean out the spent shells (#5's, #6's, and #7 1/2's), twigs, collapsible water bowls and one, lone penny.  I toss the penny back in.  I hope next season will fill the bird bag just as full.  If not with birds, then I will be happy and content with the memories of good bird dogs, fine companionship, bright blue skies and birds rising over the pointed dog, the twin barrels come up and safety clicks off.....

All kinds of critters come out when we cut the hay in the Spring. The top picture is of a King Snake my yellow lab found while we were outside weeding.  He woofed and jumped and woofed some more.  The bottom picture shows him and the Ball and Chain in the background.  I thought it might be snapping turtle, the way he was carrying on.  But, Ms King was coiled up and in no mood for a visit.  I'm sure her nest was just under the grass!
Posted by A Bird Hunter's Thoughts at 2:17 PM

Diamond Pet Foods makes Taste Of The Wild dog food. I've been feeding TOW and I've been very pleased with the results in my hunting dogs (field trial and hunting Brits) and pets. However, I just learned of yet another recall by Diamond. This time it is my favorite TOW! Crap. Sorry, but it angers me to think I've been feeding contaminated feed, EXPENSIVE contaminated feed to my hunting companions. Yeah, these are just dogs, but they are my dogs and I put countless hours and dollars in to their care and well-being.  You know, I just (last year) went through all this searching for a better feed for performance and health and now I think it's been wasted! It appears this South Carolina plant consistently has a problem with quality control.  Originally, I posted "I'm off Diamond and looking for another feed.....again.".  I'm not so sure now, but if I can find a suitable, available alternative, I think  this may be the last straw!
Posted by A Bird Hunter's Thoughts at 5:07 PM