Dancing with the Wolves

This is a reprint of an article I did chronicling my adventures with Bocephus.  The subject of wolves has come up, again, mainly due to the tremendous success of the re-introduction and growth in wolf population. Many bear dog encounters are ending badly.

Last year, I was introducing some friends to the Northwoods. I would point to a trail head for them to   hunt in the morning, tell them where I was going to be, wish them luck and agree to meet for lunch, or,   failing that, dinner back at the motel. As luck would have it, the warm fall day started turning dark a   little early, and it was almost black by noon. The rain started as a sprinkle and then gradually got worse.   We put out on a trail that produced a lot of birds over the years. I was the only one on it and I determined that a little rain wasn't going to interfere with a grouse hunt. I did swap my guns out,   though, and the little Fox went back into the case, replaced by a 20-ga. SKB Model 100, I used for   weather like this. Bo and I started down the trail with him running ahead to veer off to one side. And   that was that. He was gone. I walked and whistled and listened for his beeper for about an hour. The rain was heavy at times but merely a downpour at others. He could have been 20 yards out in the thick growth, on point, and I would not have heard or seen him. Finally, I returned to the truck, dried off,   cleaned, dried and oiled and cased the gun, put on some dry clothes and headed out to find my dog.  The trail was about 3 miles long-6 miles out and back. It was getting darker now and I was getting a   little more concerned about the old boy. The good thing was the temperature was quite warm-in the 60's. If he did have to spend the night in the woods, I was sure he would be able find a dry spot and stay warm.

Walking, whistling, listening and bouncing between anger and concern as I walked down the trail, I   rounded a bend as the trail dropped off sharply. I stood for a minute listening and staring down the trail.   Suddenly, a big, gray shape stepped out on the trail about 50 yards away. He was looking down the trail, away from me. After a second or two, I recognized him as a Gray Wolf.  Instantly, I realized he and I were looking for the same thing. I was looking for   my old bird hunting companion. This big, gray boy was looking for dinner, and it downright pissed me off!  "Hey" I yelled, "Get out of here!" (Or words to that effect and edited for content.) I expected him to jump and run like the coyotes I'd encountered   numerous times out West.  His reaction was quite a bit different than I anticipated.  That huge, majestic canine slowly turned his head to the right and looked me right in the eye.   Then, he slowly turned back to the left and trotted down the center of the trail without so much as backward glance. Even now, I'm impressed with him.  He was huge-easily three times the size of my bird dogs, which would make him over 100 pounds! And as he trotted off, in the direction of my lost dog, he more glided than ran.   Just then, I came to the realization that I was completely unarmed!  It was one of the few times in my  life I really did want a gun in my hands-and it was resting, dry and well oiled, in my truck over a mile away. Not thinking all that clearly and remembering the literature I'd read about wolves not bothering   humans (yeah, except for the thousands of years of history and stories about wolves devouring little kids and old men ... the big, bad, wolf, and on and on ....) I pressed on down the trail calling and keeping a   careful eye behind me.   An hour or more later, at the end of the trail, I turned and headed back to the truck. Concern now was for my ability to make it back before dark.  I picked up the pace. Head down in the rain and moving along pretty quick, I rounded a bend and there he was.  A 35 pound bundle of shaking, wet Setter!   I'm not sure who was happier to see the other, but I got down on my knees and hugged that mutt and thanked Jesus for the one more time he answered my prayers.   We didn't stay long on that trail in the rain, and I put him on a lead and headed out. He was so tired he tried to lay down a few times and, finally, I had to pick him up and throw him over my shoulders. We needed to get out of those woods-now!   The sun was long gone behind thick clouds and darkness was settling in. The GPS said we had more than a mile of up and down to go.  I remembered that song from the '60's-"He ain't heavy, he's my brother...."   as I carried him up and down hills, slipping on the up slope with rain dripping down my neck and wet  dog scent in my nose.   Song or not, don’t believe it, he got heavy as this old man got close to the road.  I put him down and we finished side by side-both of us limping and panting hard.   Back at the motel, I checked the old campaigner over for cuts, bruises and ticks.   It was then I noticed   blood on my hands when I ran them over his haunches. I turned him around and gave him a closer inspection.   On his right rear leg, just below the tail, was the perfectly round hole of a canine tooth!  Bo wasn’t talking, but to this day I think he encountered my big, gray friend, too.   I think we were being watched during our little reunion on the trail, in the rain, in the Wisconsin grouse woods.
Posted by A Bird Hunter's Thoughts at 11:38 AM

Why I NEVER Brag About My Bird Dog

Recently, I was hunting in the great state of Michigan, chasing the King of Gamebirds, the Ruffed Grouse.  (It's always referred to as "chasing" grouse, for some reason.)  The habitat was perfect.  The day was a little warm, in the 60's, the sky was overcast and we had a little breeze.  All in all, a perfect day to be in the grouse woods. As I unloaded dogs and proceeded with the goat-rope involving excited bird dogs, tracking collars, vests, water, guns and trucks, I noticed an older man with worn boots, scarred leather gloves, battered hat and patched trousers walking down the road. He was toting an old double in one hand and had his other hand tightly gripping a lead attached very high energy liver Brittany. Seeing as bird hunters, generally, are a small group and Ruff hunters are an even smaller group, I took the time to corral my dogs and greet the old man.  We made some small talk about the birds, cover, weather, and even old shotguns.
Finally, the conversation turned to bird dogs.  Since he was obviously a man of discernment, as I could plainly see the beautiful, male Brit at the end of the tether, I asked if he thought the pup was going to be a great dog. He smiled ruefully and said, "In my youth, I would brag on my dogs like they were part of the Second Coming!  Now, I keep my mouth shut.  I found the moment I bragged on any dog, the die was cast and I was in for a real adventure with him!  Let me tell you about one morning, right here in these beautiful, Michigan woods......" 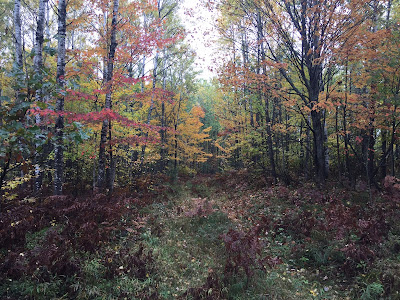 The old man turned out that fateful morning with his two males on the ground.  It was a good combination of dogs- the 6 year old superstar, and a 3 year old up-and-comer.  He knew these woods held grouse and he was ready for an enjoyable morning. The 6 year old, was his best dog, and everyone who knew him, knew his dog.  He wasn't shy about about bragging about the liver Brit (some may say it approached obnoxious, but any bird dog man would say that's impossible!).  So, off they went down the trail, the old man with double in hand.  After a half-mile or so, he noticed the young dog was still working well, crossing the trail and working either side, but the other boy hadn't checked in for a while.  A glance at the Alpha told him he was .21 miles out.  Not concerned, he toned him and expected him to turn back and check in, as he worked with the younger dog getting him in to some great cover.  A short time later, he glanced at the GPS again, and saw the other dog (Let's just call the wonder-dog "Cap" for sake of clarity.) was now .42 miles out!  Slightly alarmed, the old man blew his whistle and switched his Garmin Alpha to map mode to see where the boy was headed.  Relieved, he saw only a creek and an old dirt road in front of the moving triangle. .75 miles out now.  He raised his double and fired twice, and blew his whistle again, while watching the map.  Cap stopped, circled and headed out once more! At 1.2 miles out, Cap hit the dirt road and started back to the truck. Whew, thought the old guy, he's come to his senses and will joining the party in a little bit.  Then Cap reversed course and headed away down the dirt road, 1.5 miles out and running down a road.
The man yelled to his other pup, reversed course and moved as fast as his old legs could carry him back to the truck. He crated the young dog, removed his vest, stowed his gun, closed the tailgate- all in record time.  He cranked the diesel and turned around on the two-track, throwing leaves and dirt as he accelerated to the dirt road his dog was running.  1.75 miles out and approaching some private parcels along the road, now, Cap's little marker seemed to stop and then run in circles.  The old man turned a corner just in time to see his prized, champion, perfect bird dog holding on to a big yard chicken by the tail feathers!  He slammed to a stop and glanced at the house, noticing the big picture window facing the alleged altercation.  At this point, the feathers came out of the chicken and she made some very tight right and left turns- to no avail, as the highly trained BIRD dog pounced on her. Cap looked up, saw the truck and the agitated, old man running to him, and made a perfect retrieve to hand.  "Where in the world have you been?" Cap said.  "Here, I've got something for you!"  The man took the chicken as Cap jumped into the front seat of the truck, now covered in feathers, mud and slime.  As the man climbed the steps of the house, he could only worry about how much this now-expired chicken was going to cost him.

Since that episode, the old man explained, he's refrained from bragging on any dog, because, at any given moment, any dog can lose his mind and act like a complete fool.

The follow up, one year later.  The confession:  http://www.abirdhuntersthoughts.com/2018/06/bird-dog-bragging-follow-up-to-the.html