Having some fun in the off season! NSTRA.

I first ran a NSTRA (National Shoot to Retrieve Field Trial Assoc.)  field trial in 1993 (perhaps 1992 or 1994, but '93 is my best guess.).  My member number is 8381 and we are way past the 4-digit numbers, now.  I remember where that first trial was, too.  In N. Georgia at a man's farm by the name of Chuck Parkerson.  Chuck, and the fledgling Georgia Region, wanted new members and advertised in the Georgia Market Bulletin. They said you could have fun with your bird dog, more action per acre, and extend the hunting season.  The yuppie, with the Brittany his wife bought out of the Atlanta paper for his birthday, showed up to see what it was all about.  It rained and was cold and dogs ran off, trucks got stuck......but, it was a great time!  I had a blast and never looked back!  I was hooked on the field trial game.  (www.nstra.org)

Back then, I walked fast and grumbled because I couldn't get a decent workout in during the day. I was known to change into running shorts and take off for an hour run between braces. Now, I grumble when I run more than 4 braces in one day, because my legs cramp and I'm sore all night!

Back then, I worried my dogs wouldn't back. Now, I worry because they back too much.

Fast forward to today:  We (Ruby) managed to win the 2016 Georgia Region NSTRA Championships. She is the first Brittany to have ever won the Georgia Region.   Over the years, we managed, with different dogs, to place Second twice, Third twice, Fifth once and Sixth once.  I made a comment at the end of this trial that I felt like I was always the Bridesmaid and never the Bride!  Well, all that ended last weekend.  My dog, Ruby (NSTRA CH Flyboy's Ruby Deux), won the Region Championship!  I qualified three dogs for the championship trial, Cap (my go-to male Brittany), Shack (my young, up-and-comer male Brit) and Ruby (my female Brit, who just had a litter 28 Dec!).  I almost didn't enter her, since her puppies had only been gone a month and I wasn't sure she would be fit enough for 6+ runs in three days.  Apparently, I was wrong. Not only did she have the fitness (we did work hard on that), but she had a tremendous desire!  She missed one hunting trip with her puppies and a few field trials.  Do you think she didn't know where I was and what I was doing without her?  I'm lucky she didn't bite me when I got back and brought three tired and skinny bird dogs home.

From the first run Friday, until the last retrieve on Sunday, she ran a hard and thoughtful race.  I swear I saw her return to an area (at least twice, I saw this) and work it until she found and pointed a bird that was buried up in tall fescue! She's always been a thinker- and that will slow down a dog.  Many times, the hard charging, run to the front dog will find more birds, while the thoughtful, methodical dog will be left behind in the race.  This weekend, Ruby managed to use her head and her speed to her advantage.  In addition, when I needed her to listen to me, she did.  We were truly a team.
So, now, the lady is retired.  She has nothing to prove to anyone.  She has her NSTRA Championship and her Region Championship and it's time for her to retire and make room for our follow-on male ball-of-fire, Shack.  She will be my quiet, no drama, steady hunting dog and she will make my next puppy for the string.  I never need to wonder when I drop the tailgate in Montana, Arizona, New Mexico, North Dakota, or anywhere, what dog I have when she jumps to the ground.  I have my steady, reliable champion.  My girl.

Posted by A Bird Hunter's Thoughts at 8:00 AM

A different slant on the election. Who is looking out for the birdhunter?

I'm not a political creature.  I pay attention, I vote for who I think would do the best job (in this case, leading the country.), and I demand a certain sense of character/decorum/attitude from that person.  Long "coffee house" discussions bore me, and I've noticed they are usually more about the speaker than about the issue.  Speaking of issues, The big ones, Defense, Security, the Common Good, etc are obviously most important. After all that, how about the really minor stuff? Who's looking out for us?

For example, the Public Land issue out West has been a brief flare now and then in the news.  What would Hillary or Bernie or Donald or Ted or Marco do with them?  Would they turn them over to the states?  Would they continue to keep the Federal ownership and accessible to all of us?  I think the answers might surprise a few people. 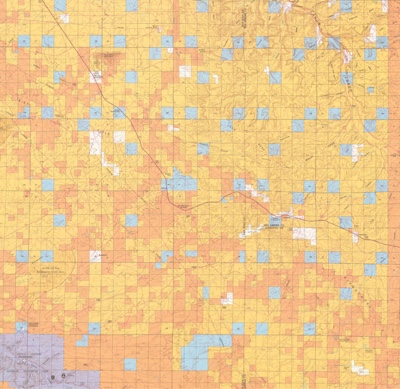 This is a BLM map of a piece of NM. Each square is a square mile (640 AC.). Currently, all of it, except the white squares, belongs to you- almost all of it huntable without permission.   This is an example of what's available to the hunting sportsman right now. Will the states do a better job of protecting it and still allow access?