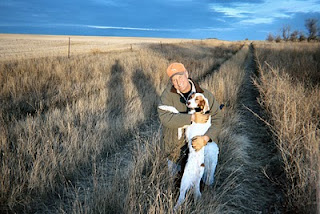 (Note: Bo was checked by a vet prior to running and after, also.)
Next:  The Big Trial
(Another note:  I'm sorry about the editing.  I've worked over the years on this book and, during an upgrade, I lost the digital version.(!) So, I am scanning with Acrobat and using OCR, etc. )
Posted by A Bird Hunter's Thoughts at 8:07 AM