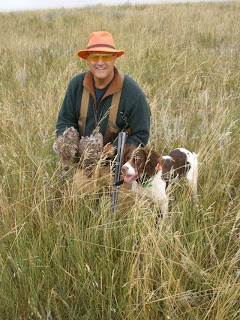 We were about 2 hours into a cast for grouse in Wisconsin.  Bandit was working great for an eighteen month old pup- working either side of the trail and checking in, but not too far out. I guess I became complacent, because, the next thing I knew, his beeper was GONE!  I remembered watching him about 50 yards off the trail and backtracking, but I didn't think a thing of it- he'd done it all day.  I gave a blast on the whistle and expected him to come flying up like he always did- no dog.  I reached for the Garmin a watched the little sucker heading for the hills about 200 yards out.  The problem was, he was heading deeper into the woods and not turning in response to my plaintive toots on the whistle!  I yelled and blew the whislte as he kept moving deeper and deeper- 300, 400, 500 yds.....finally, at 1 mile he turned and looped around- and around- and around.  I knew the little guy was lost, couldn't hear me, and had no idea which way to go. Hoping he'd figure it out, I fired my gun in his direction, but although he stopped (and I fired again), he turned in the wrong direction and headed out away from me.  Finally, at over 1.5 miles in the thick, hilly woods of Wisconsin, I got a beep and message that the signal was lost.  I ran to my truck (about 400 yds away), grabbed my extendable antenna, got on the road and drove to what I estimated was the closest point of approach to a local road.  I stuck the thing out the window as I drove and picked him up at 2.5 miles from the truck.  Luckily, he was heading for another local road in the woods and I determined to head him off.  As I got there, I watched him turn in circles again about 700 yds out.  I jumped out and fired 2 quick shots and noticed him stopped ("On Point").  I fired 2 more shots and he started my way.  I noticed an old logging trail that headed in his direction and started up it with the Garmin in one hand and my whistle in the other.  When he departed from the track, I'd give a long blast and he would home in on it again.  Finally, he saw me!  That was one happy little camper as he jumped in to me and wagged around me.  I guess I was a little happy, too, to see the little bugger again.  I can only surmise at what caused him to head out and figure he bumped a bird and went after it, perhaps bumping it again, or chasing a deer.  Whatever the cause, I was darn glad I had and was using the Garmin.  I may have found him that day, but I may not have.  And it would have been a miserable night for both of us.   (On a separate note, I jumped 2 grouse on that old logging road heading in to find him.  It's marked on the GPS for future exploration.  There's a silver lining to every dark cloud.)