Hunting Nebraska with Scott and Jeff....

One of the benefits of delivering puppies to bird hunters is the occasional invitation to stop and "have your bird dogs stretch their legs a bit". Scott (El J's proud papa) showed us to the hunter's suite and told us the smoked prime rib would be on the table at 7.....don't be late. (Not to worry, Scott!). We ate like kings for the next three days thanks to Scott and his wife, Jennifer!  The next day we loaded up and hit some private pheasant land to limit on wily, Nebraska birds. They didn't give us any slack.  They doubled back in the thick grass, but Scott's experienced Brit's were on to that trick and pinned them dead to rights. 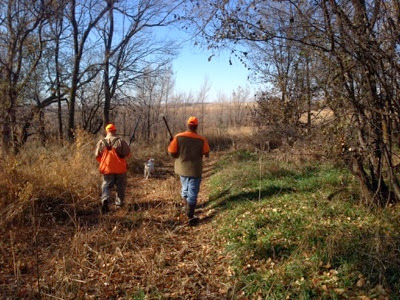 Bobby shot 'em down easy and Scott's gun, nicknamed "Black Sabbath", was a pheasant nightmare. The dogs were spot on. They worked hard in some warm weather and when the weather changed for the cooler, they really came alive! 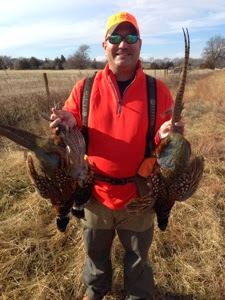 All of them displayed exceptional manners, backing when appropriate, with no altercations between the dominant males. Although, there was one small glitch in that picture. Ruby, fresh off a litter of 11 pups, pointed a rooster and, on the retrieve, was getting some determined resistance from the old cock. One of Scott's big males ran to assist on the retrieve and Ruby took exception..she jumped right in his stuff, making it extremely clear whose bird this was!  Champ stomped off, gentleman that he was, muttering "b#tch"!  He was right. 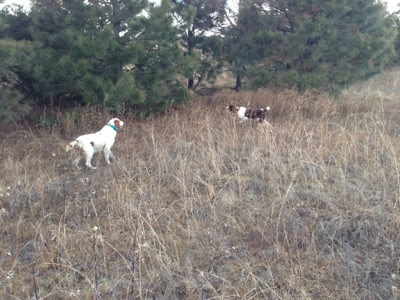 I managed to put lead on some birds as well on this trip. This is a secondary pleasure to seeing my dogs hunt, point and retrieve. And on this trip, it even took a back seat to meeting the owners of my puppies. I couldn't be happier with each of them. 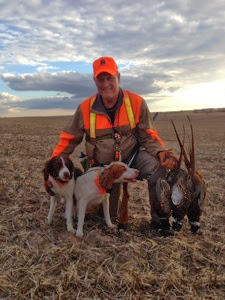 Scott dropped a very nice Hungarian Partridge and wanted to get it mounted. The thing was huge.  It's  going to make a great mount. We had some discussion as to the proper way to store a bird for mounting. I think that would be a subject for a future BLOG. We straightened it out, smoothed the feathers and bagged it with the air pushed out. 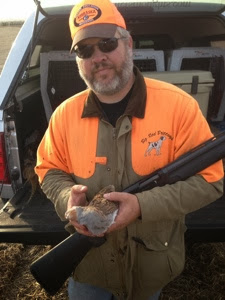 Jeff Mimick, owner of Dixie, took us to some family land with his GSP, George. We pushed birds for a hundred yards through 5 foot tall grass until we finally got them up against a ditch and they started coming up. It was point, move, point, move, all the way. I was out of position, but Bobby and Jeff dropped two on the rise. While my Cap dog made a blind retrieve on one, gathering all the attention, Ruby went about her business and brought the second bird to Bobby and said, "Hey, you looking for this?"  Meanwhile, Cap located the first bird and started back across the brush, down the creek bed and in to the deep water. Up the other side, the bank went vertical, and he lost the bird, it rolled into the water and started to flow downstream. George to the rescue!  While my little prima donnas were thinking up reasons for not getting wet(ter), George jumped off the bank, hit the water, swam to the bird, grabbed it, swam back, three-strided it up the vertical bank and handed it to Jeff. (I thought I caught the hint of a smirk there, as well, but I may have been mistaken.) 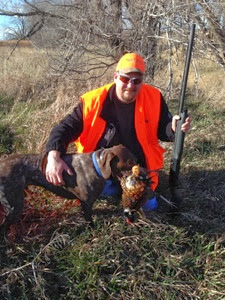 This was a great two days hunting with good people and good dogs. Scott Magnusson has Big Red Brittanies, and his Jigs dog was daddy to my Ace dog. That's why he and I were both eager to ensure he get a pup, El J, out of this litter- Ace's last. His Brits are big, long legged, bird hunting machines. They hunted from sunup to sundown with consistent style and grace.  Jeff Mimick and his dog, George, were a pleasure to hunt with, as well. They worked well together and George knows what he is doing in the field. 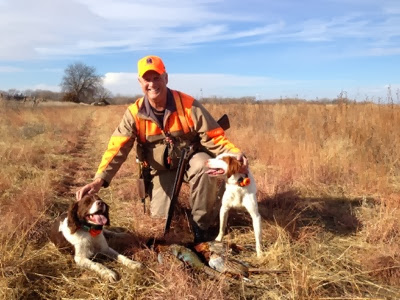 This is pheasant country and all these folks and dogs know a bunch about harvesting these colorful birds. I'm truly honored to have spent a day or two with them.
Posted by A Bird Hunter's Thoughts at 2:28 PM