Another Memory from the Idaho Trip 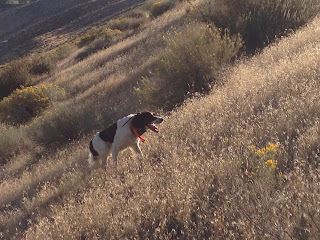 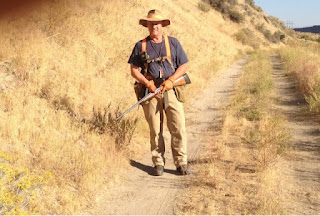 The last day of the hunt, an incident occurred that I thought was pretty neat. As you can see by the two photos, we were hunting some steep hills.  What you can't see from the pics is the Snake River.  Basically, the hill drops directly into the Snake, with just enough flat for a road.  Bandit (top), Ace and I (bottom) were hunting a covey of Valley Quail in this area. We'd already been in the mountains and chased Huns all morning and had to pass this spot on the way back to the motel.  I knew Ace and Bandit needed one more run, they were up (in the rotation) and they would be sitting for a few days on the ride home.  We'd just finished working a huge covey of Huns and I wanted to try the hillsides, for some unknown reason. As I walked along the slopes, the dogs ran from top to bottom, pointing, backing and doing some pretty neat dog stuff.  The problem was: the slope was curving around a hill.  When a bird got up, even over a point, I had to know exactly where my dogs were before I shot.  I had visions of a dog popping up around the curve of the slope just as I pulled the trigger! The result was no shooting, even though we had lots of bird action.  Finally, my pager went off and I saw Ace locked up on a large bush at the very bottom of the hill, just above the river.  I knew if I went down there, I would not be climbing back up that hill.  But, he was adamant, so I started down to him. I walked off the side as I approached the bush (and Ace) and looked for Bandit, just as his pager beeped, too. He wasn't anywhere near Ace or me, so I looked up-hill.  There he was, front legs locked, facing head down, 30 yards up that steep slope....backing Ace.  Wow!  The picture will always be in my head.  I grabbed for my camera and started walking around the bush to get a shot, but Ace took that as permission to re-locate on the bush.  Bandit saw Ace move and came down to join him.  I never got the picture...in a camera.  I do have it in my head.  Ten years from now, I may have occasion to recount that scene.  Perhaps, it will be in a blinding snowstorm by then and not the heat of the actual day.  And perhaps, I'll shoot a double when the quail come out of that bush.  No matter what embellishments may be attached, the snapshot of Ace pointing and Bandit backing on that steep slope will be with me forever.
Posted by A Bird Hunter's Thoughts at 4:14 PM