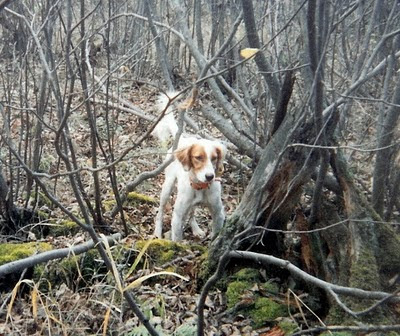 Nutrition, training, care, grooming- all these are important in caring for a pup.  But, the one I have the most difficulty with is the name.  For example, the field name of the dog pictured is Bo.  He's one of the best I'll ever have for just pure bird-finding (shown on a Ruffed Grouse in Wisconsin).  I thought Bo would be a great field name; it's short, easy to say, even with the volume turned up, and it has a long history of fine dogs attached to it.  It wasn't until I was well along in the process that I realized "Bo" sounded a lot like "Whoa".  (I know it's pretty obvious when I say it like that, however.)  Bocephus managed to not let me screw him up too much and went on to be a fine dog, but the problem arose when I ran him with other dogs- especially field trial dogs around here.  All of whom seem to to be trained to the "whoa" command.

Now that I have the prospect of another pup arrival in the near future, I'm back to the name quandary.  Certainly, her full name will commence with "Flyboy", my kennel name.  The rest will be some flowery language used to distinguish her from all the other thousands of registered  pups.  The meat of the matter is- what will be her "call name"?  What will I say and others hear when I address her?  Many times, her full name will give a clue to the call name, e.g., Julia's Flyboy Ace and "Ace", or Julia's Bocephus and "Bo", or (my favorite) Sally's Bud Dog and "Bud".  But, sometimes, the full name will give no clues to the field name, AFC/DC Sanctimonious Rabble Rouser Woofing Shagman and "Spot".  Then there is a field name that has nothing to do with anything other than it's just a favorite or reminds the owner of something.  For example, I was hunting in AZ one year and came upon an old fellow parked in a draw north of Globe.  We shared some time out from hunting.  He said he named his last dog after his ex.  "Yes-sir, I call her (name withheld, starts with a "b")!" I had to admit it was short and easy to yell.....


So, my wife and I came up with a few names for our as-yet-unborn pup.  We are leaning toward "Flyboy Ruby Deux" in honor of the best bird dog I may ever own (Randy's Rednecked Ruby S/F- see below).  The problem is, I don't want to use the same field name- Ruby. 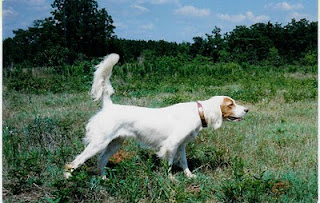 I think bold field names are best and derogatory names are very poor.  Buck, Joe, Ace, Lily, and Sam are examples of great field names for bird dogs.  Snot, Jerk, Sloppy, and Dufus all may fill the requirements, but .......  I'm a believer that names mean a lot.  Probably, because I think we humans treat others to some extent differently due to their names.  So, whatever we decide to do, we'll keep working to get her a short, easy to say, bold name that will describe her, to some extent.  Although, it's a good bet we may revert, at times, to a name similar to my AZ friend's dog.
Posted by A Bird Hunter's Thoughts at 8:17 AM