Airline Travel with your Buddy

Of all people, I should be the one to tell you travel with your dog is a piece of cake.  (I'm a 27 year retired pilot.).  However, the anxiety is still there when I approach the flight- no different than anyone else.

It takes me about 45 minutes to an hour from the time I arrive at the front of the airport to when I clear security and head to the gate.  That's to check dogs and get them through security and then do the same for the guns.  It's a goat-rope for sure, but the 2 1/2 hour flight versus a day and a half drive sure makes up for it.  That is....until something doesn't work according to plan.  In my many years of airline flying, I've seen a lot of that- things not according to plan.

We wrapped up our hunt in South Dakota with a last day that saw a lot of birds and a filled possession limit.  It was time to head home for Christmas and a lot of family time.  We packed the bird cooler with the birds (with all the requisite information on the birds) and headed to the airport and our Delta flight home.  We got there with plenty of time to spare and got the dogs and guns checked and on their way and eased to the gate to settle in for a short wait.  Piece of cake, I said to myself.  I'll be home by 10 p.m.  Our seats were called and we headed to the plane to stake our claim to the back row.  About 10 minutes before takeoff, the gate agent came back to us.  She said this airplane had a malfunction in the cargo bin and the dogs could not go with us, but would be on the next flight! We knew if we got off the plane we would spend the night there, since all the other flights were full. We decided to go to Atlanta and wait for the dogs there.  "What if they don't get on the next, and last, plane?" I asked.  "They go to a kennel for the night and we'll send them first plane in the morning." she answered.  I sure hope so, I thought.

We arrived in ATL and claimed our bags, guns and birds.  Everything but the most important stuff- the reason I go hunting- my dog! It turns out they arrived about 30 minutes after we did.  We were a little late departing and they were on time.  I have to say, I was glad to see the shaggy eared mutt roll out of the oversized luggage space.  I took his crate outside and let him out to water down.  It was then I noticed his kennel was cleaned out, the attached water bowl was new and different, and the security tabs were different than the ones on the crate earlier.  In addition, he didn't need to relieve himself- he'd been watered before he left.   Those Delta folks did all that in the 30 minutes they had before they loaded him on the next flight!  I was, and am, thankful for those good people.  I know, having worked extensively for two huge bureaucracies, the US Navy and Delta Airlines, that supervisors like letters to inform them of who's doing what.  So I wrote them a complimentary letter using as many names as I could remember.  I do know they will get the word. 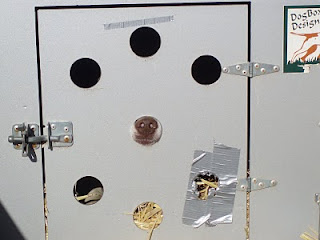 That dog trailer is looking prety good for the trip to NM to bag a few blues in January....stay tuned!
Posted by A Bird Hunter's Thoughts at 11:55 AM