I left the kennels a few hours ago. Not in the best of moods, I wondered why? I know myself well enough to know that I, occasionally, will be testy about something not evident; something I heard, saw, or experienced in the last day of two. I've been reading Mike Gaddis' book "Jenny Willow" and thought maybe that had done it. Bob Bertram recommended the book to me and I connected pretty quickly to it. I told him I was tired of reading books where the dog dies, e.g., Old Yeller style and he assured me that was not the case here. He was technically correct. I'm sure he's still laughing! But, no, the power of the book rests in the connections made between the reader and Ben Willow while he ponders his new dog, Jenny, and his life spent focused on chasing Ruffs in the West Virginia Mountains. While it is a powerful book, it was not the root cause of my unease.

No, I came to realize, it was my old Setter, Bo. He was whelped in 1999, won the QU National Championship in 2001, and a NSTRA Championship soon after. Hunting every species of bird I could get him near, he covered the country with me. Some birds he mastered, some he worked with yeoman persistence, but all of them were pointed with a quivering intensity that rarely came up dry. Old Bo is 14 and, like Ben Willow said, it's the rear end, the motor that drives the machine, that gives out. He's past having a hard time getting up. He's real close to not being able to get up. He's not in pain, I don't think, but he's very close to not being able to get in his heated dog house, or make it to the food bowl, or relieve himself. He's pretty much blind and deaf. And he's ready to go. "Turn me loose, Boss!" he says when I scratch him behind the ear.

Yes. I guess I should. 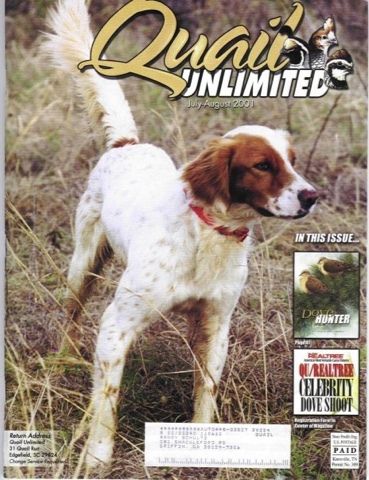 Posted by A Bird Hunter's Thoughts at 6:18 PM