Scatter My Ashes Where The Power Poles Lean 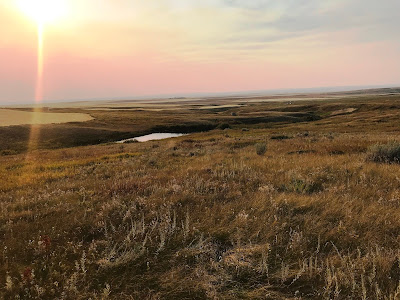 Long days following bird dogs across the prairie are a delight, a privilege, a claim rarely allowed other places in the world. I make it a point to remember that fact when I can.  Days afield, steadily walking the hills and coulees of Montana, North and South Dakota, Kansas, and Wyoming with no interference, except the occasional four-strand barbed-wire fence.  There is plenty of time to think.

It seems, over the years, and close to a million miles driven, that I usually end up in a part of the world devoid of trees.  Although one of my favorite places is the Great Northwoods, I seem to gravitate to the plains.  The Beast and I will tote the dogs west until the pines are supplanted by deciduous forests, then tall and short grass prairies, finally, the sage and mesquite take over. Along the way, we cross the Big Muddy and the Old Man River, and numerous smaller watercourses.  They were incredible barriers to expansion.  We blast over them now at over a mile a minute, without so much as a passing thought to the men and women with brains and money enough to span a mile of river with a bridge for trains, then cars.

Hunting native prairie grouse (Sharptails, Prairie Chickens, Sage Grouse), and non-native game-birds (Hungarian Partridge, Pheasant, Chukar) in the blue sky, open country of the west is worth the drive.  The Dakotas are a gentleman's compromise for a bird hunter.  They are a little less tame than Kansas and Oklahoma, and much more refined than wild Montana or Wyoming.  When asked about traveling to hunt, and destinations, I will normally suggest Kansas.  To my mind, it is the safe start to life-long adventure following bird dogs.  There is not too much in the way of danger to the dog, lots of public land, and lots of birds (in a good year).  But, one may outgrow the training wheels after a few years, and look towards some greater adventure with their hard-working dogs.  The Dakotas, Montana, Wyoming, and Idaho beckon. It's time to expand that comfort zone.  With greater risk is much greater reward.

Hunting the prairie, sometimes, boils down to the basics.  Coffee, driving, putting out, and picking up. When the day is done, and the thoughts turn to feeding, cleaning, fueling, warming, and, finally, sleeping, it usually involves a long, tiring drive back to the motel or camper.  Back down the two-track, then the widened gravel road (past isolated ranch houses and old shut down missile silos), as we look for the pavement and, finally, a smooth ride. The next day will be the same with the biggest decision where to put out, and which dog to run. 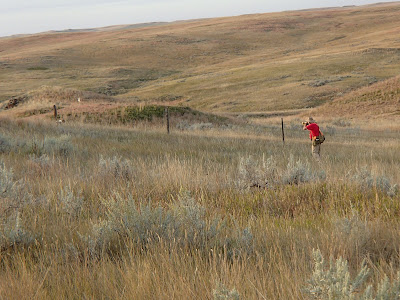 Through the years, I've noticed the ubiquitous power poles.  Perhaps due to a friend who recently took a job running a rural electrical company on the plains, I seem to look a little more at the poles and the towers.  I've discovered an interesting fact. My best days on the prairie have been where the power poles lean. Not the big, steel towers that carry a gazillion volts straight line across terrain that would give a Mountain Goat pause.  No, the short, little poles planted back in the day, with the cross bar located near the top, and glass insulators, usually 6 or so, spaced across the bar.  I suppose they brought electrical power to the remote parts of the country around the middle of the last century.  At the time, I imagine they were a technological advancement on a par with the airplane.  Yep, those poles.  30, 40, or 60 years of constant wind will push those poles out of the vertical.  Sometimes, all the way to the ground. 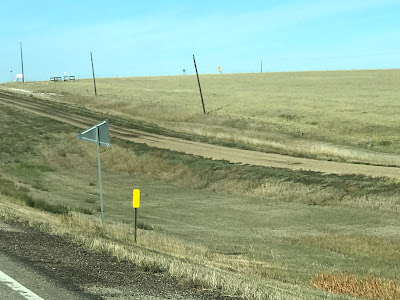 That constant wind, to me, is synonymous with  the outstanding bird hunting for the prairie birds. More and more, I see the remnants of long runs of old poles, leaning with the wind.  Fighting hard and winning a few battles, but losing the war. They, like the Old Roads, are reminders of a bygone era.  But, they mark the land I love to hunt.  Rarely, do I not see them, now that I look.  It's not that all leaning poles mark good hunting. it's that all good hunting is marked by leaning poles.  When the time comes, I think I'd like my ashes to be spread where I was one with the wind, dogs, birds, sun, snow, and rain- in the country where the power poles lean.

Posted by A Bird Hunter's Thoughts at 9:59 AM